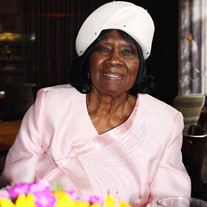 Mother Minnie Evelyn Willis, lovingly known as “Memaw”, was born March 4, 1934, in Clow, Arkansas, to Ora and Andrew Stewart Sr. She was the fifth of eight children born to this union. Minnie received her education at Clow High School in Clow, Arkansas. Upon graduation, she moved to San Francisco, California, where she met and married James Creswell. Three children were born to this union. She subsequently met and married Rufus Coulter, Sr. To this union four children were born. In 1972, she wed Gerald Olden Willis. She was a loving and devoted wife for 30 years until his passing. Minnie was a valued employee of the United States Postal Service. She retired after 34 years of service. Minnie loved the Lord and gave her life to Christ at an early age. After moving to San Francisco, she joined Greater Gethsemane Church of God in Christ (Greater Grace Temple in Oakland) where she served as Pastor’s Aide, the head of the Hospitality Committee, on the Mother’s Board, and participated in many fundraising events. She was also voted “Grandmother of the Year”. She was well known for her fancy suits and beautiful hats. Minnie touched many lives over the years. Her biggest pleasures in life were worshiping the Lord and spending time with her beloved grandchildren and great grandchildren. She showered them with love and affection and they returned the favor. They often treated her to dinners, fresh flowers, frequent calls and visits with her favorite snacks. There was (and still is) competition over which grandchild is her favorite. Minnie was a loving, caring and compassionate mother, daughter, sister, and aunt. She frequently opened her home to those in need for an extended period of time. She was kind-hearted and generous and known for helping anyone in need. Family and friends gathered regularly at her home. It was welcoming and filled with warm memories for many. On Sundays, she opened her doors to feed anyone who stopped by. Just a few of her specialties included meals of gumbo, turkey wings with dressing, roast beef, yams, greens and assorted deserts. She never turned anyone away. Minnie was preceded in death by her parents, her spouse, three sisters, two brothers, and her oldest daughter, Barbara Ann Creswell Jones. Minnie leaves to mourn her passing and cherish her memory, her children: Ronald E. Creswell (Cynthia) of Antioch, CA, Ramona “Lynn” Green (Richard) of Jacksonville, FL , Cheryl A. Hyland of Antioch, CA, Rufus A. Coulter, Jr. of Nashville, AR, Jacqueline Coulter of San Francisco, CA, and Kenneth A. Coulter of San Francisco, CA; one sister, Velma Williamson of Clow, AR; two brothers, Isaac Stewart of McCaskill, AR, and Andrew Stewart, Jr. (Alzean) of Clow, AR; ten grandchildren, Marques Jones (Karen), Kenneth Jones, Anjoli and Antoinette Green, Emma Peterson (Dexter), Ashley Navarro (Randy), Stephanie DeBaun (Malcolm), Tayler and Ryan Creswell, Sean Hyland; fourteen great grandchildren, Ahmon, Anaya and Ahmir Jones, Kingston Green, Austin Lybrook, Randi Navarro, Ariana, Paige, London and Savannah Peterson, Kristine and Kris Pham, Aija and Ron-Ale Jones; three great-great grandchildren, Mya, Marceleno and Malaiyah Pham. She also leaves to mourn her loss a host of relatives, friends, and the Greater Grace Temple family.

Mother Minnie Evelyn Willis, lovingly known as &#8220;Memaw&#8221;, was born March 4, 1934, in Clow, Arkansas, to Ora and Andrew Stewart Sr. She was the fifth of eight children born to this union. Minnie received her education at Clow High... View Obituary & Service Information

The family of Minnie Evelyn Willis created this Life Tributes page to make it easy to share your memories.

A comforting word from you means a lot.

Send flowers to the Willis family.