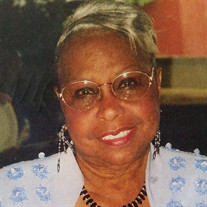 Rosemary Bush Holloway Williams was born February 21, 1927 in New Orleans, Louisiana and departed life June 5, 2016. Rose was the only child of Isadore and Lillian Bush. Her Mother died when she was four years old. She was surrounded by many influences and was the light of her Father's life. Rose was a dedicated Christian woman, humble and with strong convictions. She graduated from High School and attended Dillard University in New Orleans. She migrated to California where she attended U.C. Berkeley and received her Masters degree in Microbiology. On her way to Oakland by train, she met John Victor Holloway. They married December 16, 1949. They were married for 25 years. From this union was born five children: Sharon Elaine, John Victor Jr., Walter Eugene, Vanessa Dale and Frederick Lamar. Fifteen years after the death of John, Rose met and married Delmar Williams (deceased). Del had two sons, Gerald and Donald(deceased) who became a welcome addition to her family. She was blessed with a loving and beautiful family. They became the light of her life. She was employed by the I.R.S. and later Hunt/Wesson Foods in the Laboratory. She became the first black woman supervisor in the Quality Control Department. Soon after Rose arrived in Oakland, she became a member of Progressive Baptist Church in Berkeley, She later became a devoted member of Amos Temple CME Church under the pasturage of Rev. John J. Borens who was followed by several other Pastors. Now we are blessed with our current Pastor Rev. Travis A. Morris. Rose was a "people person." She worked with various organizations in her Church: Missionary Society, Stewardess Board, Sunday School, Tuesday Prayer Band and the Covington/Harris Circle. She was the coordinator of the Feed the Hungry Ministry. She also worked with Project Spirit, a tutorial program of Amos Temple. Rose was named Woman of the Year 2004-2005. She received many awards for her service and received The Lifetime Achievement Awards in 2009. Somehow Rose found time to serve her community concerns. She was a Lifetime member of the N.A.A.C.P. and a supporter of the Oakland Community Organization (OCO), a vehicle for thousands of local families to improve the quality of life their community. She was an avid facilitator in voter registration and encouraging people to vote. She would even fill out your voter ballot. She was a member of the Excelsior's and Esoteric Social and Civic Clubs and a member of the Alpha Wives Auxiliary. She was interested and participated in political activities, voter registration and education. She was blessed to be able to attend the 2009 Presidential Inauguration of Barack Obama in Washington, D.C. This was one of the greatest highlights of her life. On July 23, 2012, she was a "guest" of President Obama who visited Oakland at the Fox Theater. Rose loved to travel, enjoyed music, dancing, bowling, sports and reading. She relished the fellowship of her family and Church family and the importance of the faith and serving God. She was preceded in death by her parents, Isadore and Lillian Bush, her first husband, John Victor Holloway, Sr., and her second husband, Delmar Williams. She leaves to cherish her memory two daughters, Sharon Hollimon (Perry), Vanessa Holloway (Fred), five sons John Holloway Jr. (Bridgette), Walter Holloway (Lizzie), Frederick Holloway (Lauwana), Gerald Williams (Diane) and Donald (deceased); 14 grandchildren and 18 great grandchildren; her second family: Marion Montgomery, Clarence Irving, Amos Johnson, Anne Jones, Anthony Johnson; and a host of extended Family and Friends. To say Rose will be missed is an understatement

Rosemary Bush Holloway Williams was born February 21, 1927 in New Orleans, Louisiana and departed life June 5, 2016. Rose was the only child of Isadore and Lillian Bush. Her Mother died when she was four years old. She was surrounded by many... View Obituary & Service Information

The family of Rose Williams created this Life Tributes page to make it easy to share your memories.

A comforting word from you means a lot.

Send flowers to the Williams family.